You open the Openplanet overlay by pressing F3. (If this doesn't work, see troubleshooting.) 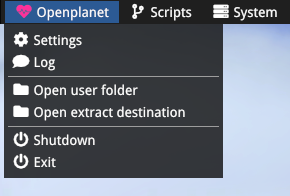 In the main menu, you can access all the common options and open every other dialog. Everything should kinda speak for itself, but this page will highlight a few of the more interesting ones.

NOTE: In the above screenshot, the Shutdown option will cleanly shut down ManiaPlanet, while Exit will force close the game instantly.

On the settings dialog you can set some general settings for Openplanet, as well as script plugin settings per plugin that is enabled.

The "Plugins" tab shows a list of installed plugins as checkboxes. If they are checked, it means the plugin is enabled. 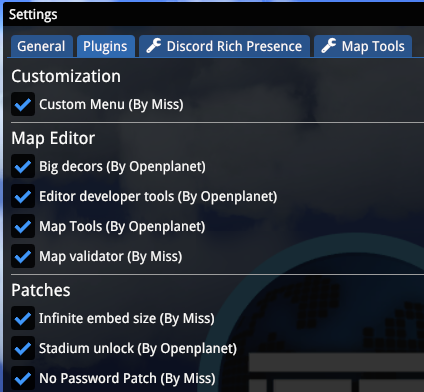 The nod explorer is one of the most important dialogs in Openplanet. It allows you to "explore" the game through its many "nods". A Nod is basically an object of some (often serializable) class in the game. All of these nods inherit from CMwNod, which is why it's called the Nod explorer.

The standard base of the Nod explorer is the main game app. This app is always of type CTrackMania for the regular ManiaPlanet game.

The pack explorer lets you explore pack files, such as .pak and .Pack.Gbx file contents, as well as extracting them to the physical file system. 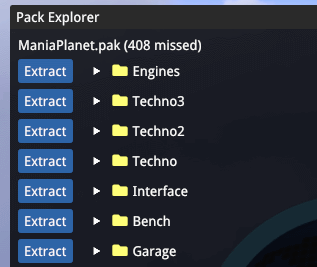 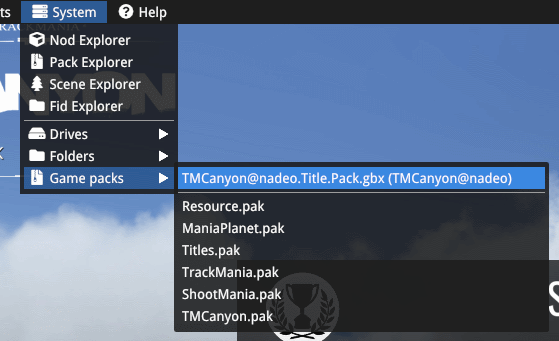 The pack explorer will show all files and folders in a pack file, as long as they are known. Filenames are not always exposed in the pack file. Most files you will find in pack files have their actual filename hidden, and instead only have a hash of the filename. When Maniaplanet requests a file from a pack, it will hash the requested path and look for it. The hash will match, and the file will be loaded into a Fid. (See below for the Fid explorer.)

This means that for those protected filenames, we can only resolve the filenames if we have (previously) loaded the file into the game. When you use the Pack Explorer, Openplanet will keep a cache of all resolved filenames, and store it in a file called FileHashes.txt.

The Fid explorer lets you explore the files currently mounted within ManiaPlanet, as well as extract them to the physical file system. It's more of an advanced feature, since it can cause confusion about where files are really from. In most cases, you should be using the Pack explorer described above.

You can access the different mount points by going to System -> Drives/Folders in the Openplanet menu. 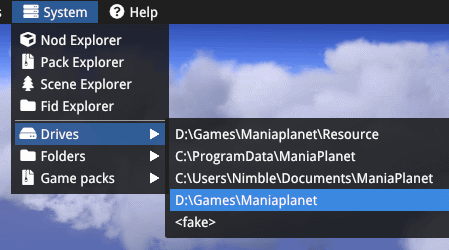 NOTE: Due to a currently unfixed bug in ManiaPlanet, some files may fail to extract correctly and will therefore be corrupt on disk. This is a known issue that is being looked into. The majority of files do not have this problem, however.

The script debugger displays what each plugin is currently doing and how much time is spent doing it. This can be useful for debugging your scripts. It doesn't currently feature stepping through the code line by line, but this will probably be implemented in a future update. 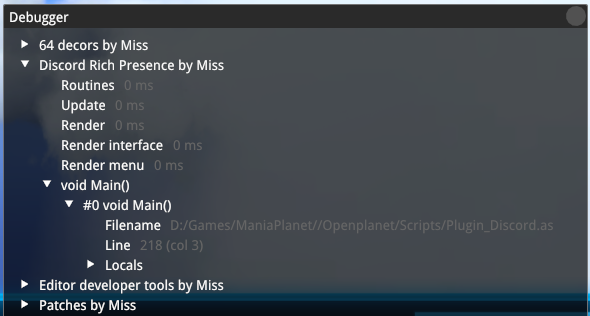